As you might recall there is one very important bus in the scope that connects the SoC to the FPGA. The FPGA is supposed to emulate a DDR2 memory connected in parallel with the real DDR2 memory to the SoC. This is a fairly fast bus running at 133MHz with data being transferred on both edges of the clock.

“How hard can it be anyway?”

The DDR controller control signals are always driven by the SoC and are synchronous to the DDR clock. These are the chip select (/CS), row address select (/RAS), column address select (/CAS), write enable (/WE), bank address (BA[1:0]) and address (BA[11:0]) signals. These signals are single data rate (SDR) which means that they should be sampled on the positive edge of the DDR clock.

Data is transferred on the DQ signals using the DQS signals as a clock. Data is transferred at double data rate (DDR), that is, on both the positive and negative edge of the DQ signal. Each byte worth of DQ signals has its own DQS signal. The DQS clock should be running at the same frequency as the DDR clock but can vary slightly and can also be slightly off in timing for each byte.

Someone who wants to implement a 16 bit DDR memory properly has to do something like this: 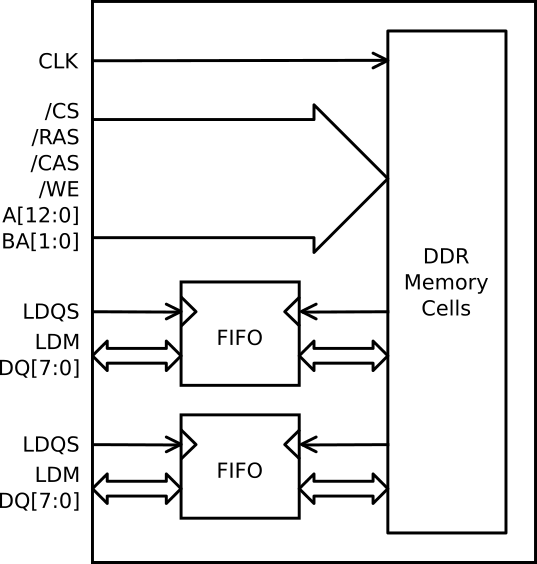 Then I realised that the bulk of all data transfers are going to be sample data from the FPGA to the SoC. For the few transfers I have to do from the SoC to the FPGA I can use the slow SPI bus I already have and have been using for a while. So I can get away with emulating a read only DDR memory, and in that case I can transfer all data using the DDR clock and don’t have to care about multiple clock domains.

That would make everything much easier, all I have to do then is to figure out how to use the ODDR2 primitives of the Xilinx FPGA to be able to transfer data using DDR on both edges of the clock.

I could even use a read from a specific address to tell the FPGA that I have finished reading data and that it can perform a new capture.

I could probably manage that.

Since there can be multiple DDR memory chips connected to the same DDR bus each memory has a separate chip select (/CS). When /CS is low the chip is selected.

To access a DDR memory a bank must be opened and a row selected. This is done by sending a Bank Activate command which is performed when /CS

The controller can then perform multiple reads or writes to the active bank and row. A read command is performed when /CS + /CAS are low and /RAS + /WE are high. Data is transferred a few cycles later on the DQ lines (with DM as a data mask on writes) using DQS as a strobe. Data is always transferred in bursts. For the DDR memory in the SDS7102 a burst consists of 4 words. If the DDR controller wants to read a single word it transfers all 4 words in the burst but can throw away the 3 words it doesn’t need.

A write command looks almost identical to a read except that /WE is low. The /DM signals which are transferred in parallel to the DQ signals are used to specify which words of a burst should be written to memory.

Its possible to perform multiple read and write commands to the same row. One bank select command could be followed by a read command and then a write command.

There are a few more commands in the DDR protocol. There are configuration commands which configure parameters such as the burst length and the CAS latency - the time from the read/write command until the data transfer starts. Other commands perform a refresh of a bank or put the memory in power saving mode. After a bank has been opened it must be precharged using yet another special command before it can be accessed again. As an optimization the last read/write command can hold A10 high indicating that the memory should perform an automatic precharge of the bank.

I wrote myself a DDR controller that simulated beautifully. It doesn’t really do anything, all it does is return the address of each word as the data. I start reading a burst of 4 16-bit words starting at 0x20 I should get the following results back:

But of course didn’t work at all when I tried it in the FPGA. To speed things up I tried to use the control signals (CS, RAS, CAS, WE) directly in my test for a read operation:

That it didn’t work is not too surprising, if the time from when the control signals change until the positive clock edge when I use the result is too short the combinatoric logic will not have time to settle and I will get invalid results.

With an external bus the right thing to do is to immediately store the external values in internal registers and only use the registered values. This aligns the values to the internal clock and gives the combinatoric logic a full clock cycle to settle.

Unfortunately, this increases the delay before the FPGA returns the results to the SoC. I would see garbage in the first odd words and after that I would see data that should have been returned by previous reads:

Huh? How can this happen?

I finally realised that I was wasting one clock cycle in my DDR code which I could remove. This means that could start the data transfer earlier and the last negative clock edge would not be too late and data started showing up as it should on the SoC.

I did have occasional problems with corrupted bits and I thought this might be due to the DQS signal arriving too early at the SOC so I added some Xilinx IODELAY2 primitives to delay the DQS signals slightly and that seems to have helped.

Here’s how a burst read from the FPGA looks for real: 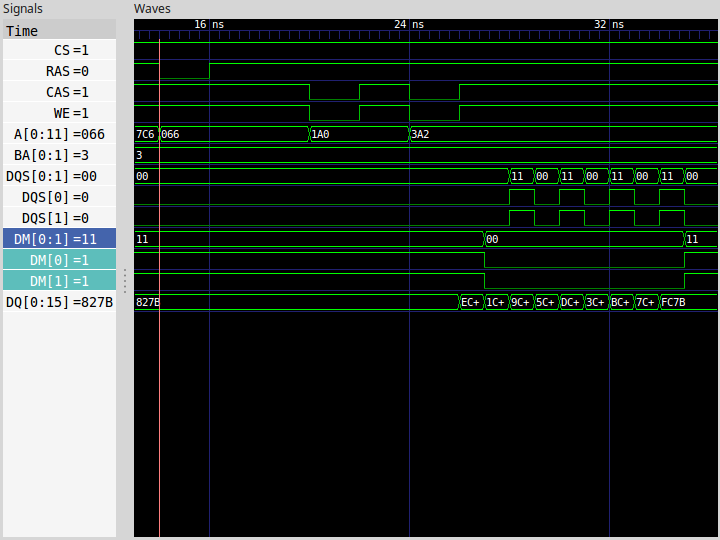 I’m not sure if I have implemented all this correctly, but it does seem to work in practice, so I’ll just nod and be happy.

The other fast bus

The other fast bus in the scope is the memory bus between the FPGA and its own DDR memory. This also worried me because OWON ignored the Xilinx requirement that “RZQ is not optional”.

Even so, at 333MHz the DDR controller should be able to transfer 333 * 2 * 2 = 1333 MBytes per second during a burst. There’s a fair bit of overhead between each burst but this should still be enough to be able to store 1Gsample/second from the ADC into DDR memory with a bit of bandwidth to spare.

Now I just need to tie all this together.

Everything I’ve written about here is available in my SDS7102 repository on GitHub. Note that I’ve switched to newer versions of both Buildroot and the Linux kernel. Take a look at README.md and run “./update.sh” if you are using an older version from my repository. And run “git log –stat” to see which checkins do what and what files they affect.