The main processor in the SDS7102 is a Samsung S3C2416 System On a Chip (Soc) with a DDR SDRAM as main memory and a NAND flash for storage. A basic embedded system very similar to the Samsung SMDK2416 reference design.

I’ve worked with other SoCs in the S3C24xx family before, so I kind of knew what to expect from the bootloader. NAND flash is a bit unreliable in a way, it’s normal for it to develop bit errors over time and that some flash pages are so damaged that they can’t be used at all. Any decent NAND flash file system will have to support error correcting codes (ECC) to fix bit errors and have mechanisms to remap bad flash pages. Most NAND manufacturers guarantee that the first sector or three in flash will not develop any errors, and thus it’s possible to put a minimal first stage bootloader there.

The first thing I did when I managed to connect to the scope using JTAG was to make a complete dump of the flash contents. The S3C2416 loads the first stage bootloader from the first 8kBytes of flash so that was what I wanted to look at. I found some strings that matched what was seen on the serial port when the scope was powered on, and some other strings that hinted that it does some kind of memory initialization and memory test. Good, it seems to do what I expected it to do.

The first stage would probably be followed by the second stage bootloader. And yes, later in the dump I found a list of strings that looked like commands available in the bootloader. This looks promising.

It also looked like the bootloader understands yaffs, a common NAND flash file system for Linux which is also available under a commercial license for other platforms.

It was fairly obvious where the bootloader ended. About 75kBytes into the dump the flash pages started being all 0xff (all ones, the default value a NAND flash gets when it is erased) and this continued all the way up to 640kBytes where something that looked like it could be a file system started.

I copied the first 75kBytes from the dump into into its own file.

What to do now that I had a copy of the bootloader in a file?

One of the ways one can discover more is to disassemble the firmware, that is, take the binary machine code and use a tool called a disassembler to turn it into symbolic assembly language that a human can read. A naive tool will mechanically translate machine code into the symbolic instruction names, a smarter tool can analyze the instruction flow and figure out the structure of the code. Some tools are interactive and will let you annotate or change the interpretation of the machine code on the fly. Some tools called decompilers can even translate the machine code into some high level language such as C or Go. I wanted something that would let me look at parts of the code and annotate it as I figure out more and more about how the code works.

There are a lot of disassemblers out there.

Good enough, Medusa it is then.

I loaded my file into Medusa and started figuring out how Medusa works.

One of the nice things about Medusa is that the Medusa database is a text file with a format that’s pretty easy to understand. I edited this file to add some memory regions with labels for all the Samsung SoC registers which makes the disassembly much easier to read and understand. 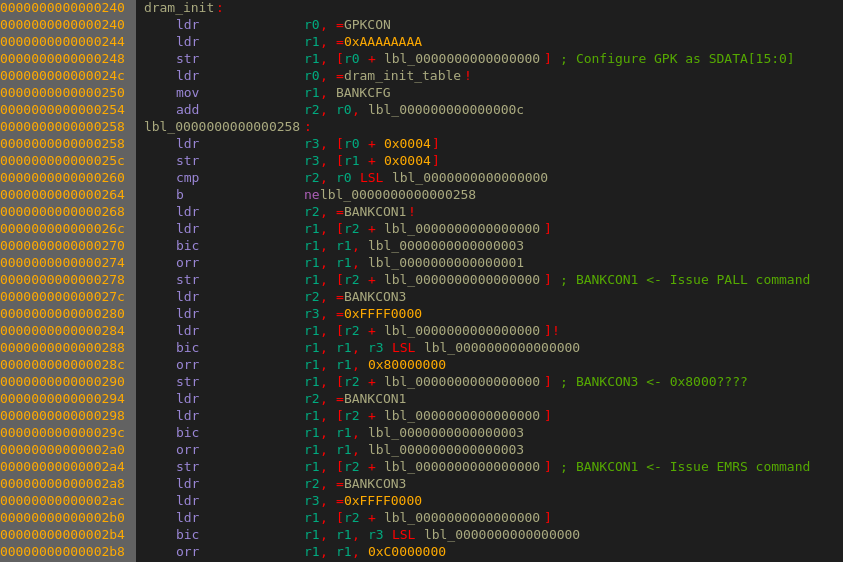 I didn’t look very closely at the code, I sort of knew what is was supposed to do and most of the details weren’t that important. What I did want to know was where the second stage would be loaded into DDR memory and where it would start executing.

I found some code that loaded the first 128kBytes of flash into to address 0x30000000 which is the start of DDR memory. It then copied about 70kBytes from offset 0xac4 to address 0x33c00000, the last 512kBytes of DDR memory and which then jumped into that code:

I created a new Medusa database with just the second stage bootloader at the correct address and started working on that.

I didn’t dig down too deep into the second stage either. Even disassembling as little machine code as 75kBytes is kind of painful so I mostly just skimmed through the code. I quickly discovered that some of the code was Thumb instructions which Medusa had big problems with. I just hoped that nothing important would be in those parts of the code. I followed the main code flow and found a lot of initialization of different data structures that I mostly skipped, but also some more interesting code that talked to the SoC registers.

There was a section of code that set up a pointer to the string “param” followed by a function call which ended up talking to the NAND controller. Hmm, what could this be a call to “open”? It was then followed by using the return value from open, setting up a pointer to some memory outside of the code loaded from flash and another register with the value 460. Could this be a call to “read”? Probably.

After I while I found some code that referenced the strings “Boot to load (Y/N)?” and “Wait for Enter”. Probably printf or puts calls. There was also some calls to code that talked to the serial port and then did a comparison with 0x75. 0x75 is ASCII for ‘u’ so I tried typing ‘u’ at the serial console while the booting the scope and yes, it printed “Enter USB–download Mode” and stopped there, probably waiting for some commands over USB.

If the bootloader timed out it would load the file “os” at address 0. It hen seemed to do some kind of checksum calculation on it, because if the return value from a function did not match a value from some location in RAM it would try to load “oscp”, call the same function and comparison again and then print the message “open or read OS ERR” if that also failed. So yes, this was probably the part that loaded the operating system and then verified a checksum to see that the file was not corrupt. 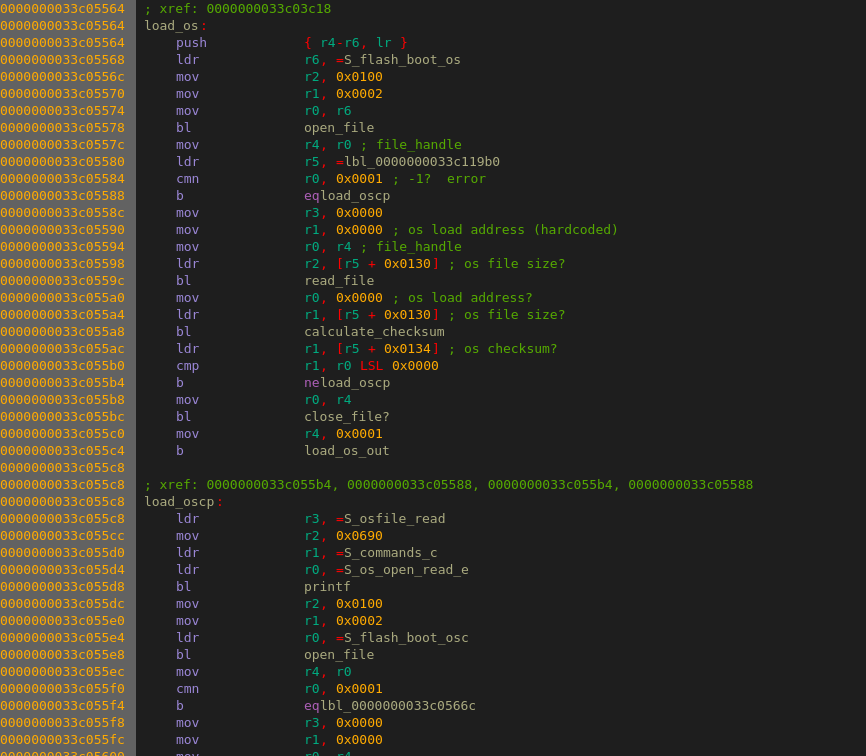 I looked but could not find any way of getting to a command prompt. My guess is that they have disabled all of that for the production version of the bootloader and that the commands strings that looked so interesting are just leftovers that can’t be used.

In a way none of this was all that interesting. It was nice to figure out that what the ‘u’ key did and a bit disappointing to find out that there didn’t seem to be any way to get to a command prompt. But were no big surprises, the code did I was assuming that it would do: set up a bit more of hardware, print some messages and finally load the operating system from flash.

I could probably have disassembled the open and read functions to figure out the flash file format that way, but that would have been a lot of work and I’m lazy.

This was a start though. I had gotten a feel for how the bootloader worked and where to look if I needed more information. And I had gotten a bit familiar with Medusa which was good.

Time to take a look at the file system, but that’s something for next time.