In my previous post I had disassembled my OWON SDS7102 scope and had just been able to locate a debug serial port where I could see some messages from a bootloader.

That looked very promising. But nothing happened when i pressed Y or Enter, the bootloader would just continue and load the oscilloscope firmware. I finally gave up on the serial port and started looking for a JTAG port.

I later disassembled the bootloader and discovered that it listens for the character “u” and this makes the bootloader stop and wait for a connection over USB. As far as I can tell there are no other characters or magic phrases that makes it do something else. I did find code in the disassembly for some kind of command prompt but I haven’t figured out how to access it. The command prompt might have been disabled permanently even though there are traces left of it in the code.

JTAG is an acronym for Joint Test Action Group which was originally a standard for testing assembled PCB. Using something called Boundary Scan it is possible to control all the I/O pins of an IC and this can be used to to verify that all the pins of an IC are connected correctly. For ICs with a built in processor, such as the ARM CPU in the Samsung S3C2416, it can provide a debug interface to the procesor.

The mandatory pins for a JTAG port are Test Clock (TCK), Test Mode Select (TMS), Test Data In (TDI), and Test Data Out (TDO). Optional pins are Test Reset (TRST) which is used to reset the JTAG interface itself or System Reset (SRST) which is the reset for the whole system. It’s also good practice to have a voltage reference (VREF) pin with the voltage that should be used to drive all the other pins. It’s of course also necessary to have a ground (GND) pin.

This makes about half a dozen pins but they can be arranged in many different ways. Sometimes a PCB doesn’t even even have a JTAG connector, the JTAG pins can be spread out over the PCB or only accessible as test points or at a component pad. Sometimes JTAG is hidden, either by covering it with a sticker or by having JTAG on a piece of the PCB that is broken off from the main PCB after manufacturing.

There was space on the SDS7102 for a 2mm 2x5 connector that looked very promising though. Probing it with a multimeter showed that the five pins on one side were all connected to VCC or GND and the other pins were connected to a couple of resistors. If this was a JTAG port four of the pins on the other side would be the mandatory pins and the fifth probably a reset or not connected at all. There is a list of JTAG connector pinouts but it only contains a fraction of all possible and used pinouts. And unfortunately none of the connector pinouts matched the one I’d found.

There is an interesting project called JTAGulator which uses a custom built piece of hardware to test all pin combinations by brute force. There are also some interesting slides and videos on that page with more details on how to discover JTAG interfaces in a device. I didn’t have to do any of this though. That “tinhead” had already figured out the pinout and posted about it on the EEVblog forums.

The pinout of the connector is:

I soldered some wires to both the JTAG port and the serial port. I then put the scope back together with the wires sticking out on the side: 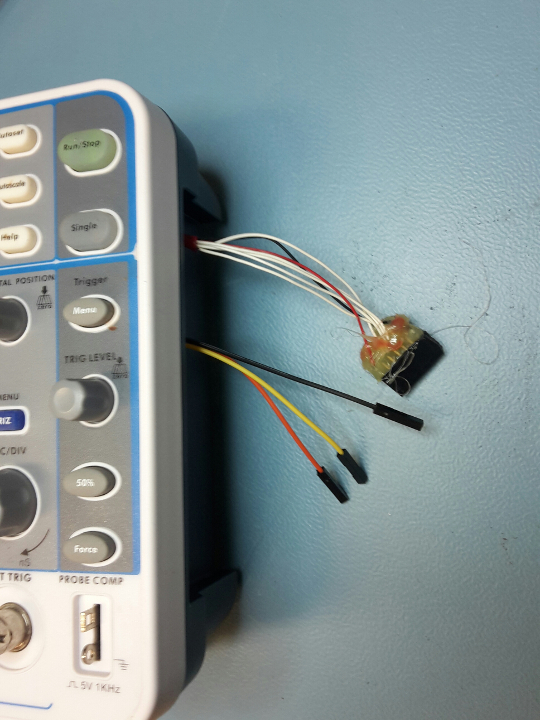 The three loose wires are transmit, receive and ground from the serial port. The big connector is compatible with a Bus Blaster MIPS that I had lying around.

OpenOCD is a tool to use a JTAG adapter totalk to a debug interface on a chip. Among other things it has support for the Bus Blaster as a JTAG debug adapter. It does not have support for the S3C2416 specifically, but it does have support for some other SoCs in the Samsung S3C family and they ought to be fairly similar.

The documentation for OpenOCD is not all that good, but after a lot of trial and error I had managed to piece together an “openocd.cfg” which looks like this:

Running OpenOCD shows that it found something:

It’s then possible to connect to OpenOCD and start doing things:

I could now poke around and do things such as read and write the SoC registers. One quick test was to find the serial port transmit register in the data sheet. It’s called UTXH0 and is at address 0x50000020. I tried writing 0x55 (ASCII for “U”) to that register:

After reading the S3C2416 data sheet and comparing it to the data sheets for some other SoCs in the same family it looked like it used the same NAND flash controller as the S3C2412. I added the following line to openocd.cfg:

Restart OpenOCD and try to probeing for a NAND memory.

When the S3C2416 boots from flash it will load the first 8kBytes from NAND flash to internal SRAM at 0x40000000. So I tried dumping the beginning of flash to a file:

This wrote a file and the contents looked like ARM machine code. Great. Let’s dump the whole flash. But dumping 128MBytes of flash with the JTAG interface running at 1MHz would be a bit slow so I tried speeding up the JTAG clock a bit. 30Mhz did not work, but 20MHz did, so I modified openocd.cfg for this:

There are some other tricks one can do with an ARM CPU to speed things up. By letting OpenOCD steal a bit of RAM and download some ARM code there it can run code on the CPU which is much faster than executing one instrution at at time. I added a few more lines to openocd.cfg to enable this (the work area is placed at the end of DDR RAM: 0x30000000

After this I told OpenOCD to get cracking:

Even with the speedupts this would take some time, at least 10 hours from a quick estimate, so I went home and planned to take a look at the dump the next day.

To avoid the risk of electrocution I had run the oscilloscope off battery when I pulled it apart and forgot to plug the mains cable back in afterwards. When I looked at the scope the next day the battery was flat and the dump had failed half way through. Nothing to do, just power on the scope, this time running from the mains, restart the dump and wait another day.

Two days later I had a dump of the whole NAND flash. This means that if I mess anything up and corrupt the flash I ought be able to restore the flash using the dump. Hopefully.