It’s been a long time since I wrote anything here so I guess it’s time to write something. A warning though, this post will talk about coaxial cables, so those with a low tolerance for boredom can stop reading now.

My oscilloscope also has a function for Time-domain transmissiometry (TDT). This functions uses the same pulse generator as the TDR function, but the cable is connected between two ports on the scope and instead of looking at the reflections, the scope will measure the signal that comes out the other end. The pulse has a 250mV amplitude and a 25ps rise time and for a perfect cable what would be what the scope would show at the other end, but with real cables there will be distortion of the signal.

A square wave is composed of all the odd harmonics of the fundamental frequency for the square wave. A first approximation of a square wave is just a sine wave, and by adding higher frequency harmonics the shape will get closer and closer to a perfect square wave with vertical edges that are infinitely short.

In the physical world is not possible to have harmonics with infinitely high frequencies, so all actual electrical signals will only approximate as square wave and will have a bit of ringing and non-zero rise and fall times. The higher the bandwidth of the system the faster rise and fall times it will have and the closer it can get to the ideal square wave.

As a rule of thumb for analog oscilloscopes, the bandwidth neccesary to show a certain rise time is:

This also shows up with cables, cables attenuate signals send through them, and the attenuation is frequency dependent. Most cables attenuate high frequency signals more than low frequency signals and when measuring TDT this will slow down the rise time of the TDR pulse. So a cable with higher bandwidth will generally show faster rise times. A cable with with high bandwidth could have high total losses though, and vice versa. A mains extension cord has horrible bandwidth but not that much losses, while a thin coax cable can have pretty good bandwidth but high resistance and losses. Another thing to think about is the impedance of the cable, a thin and flexible cable might get bent or pinched so that the impedance varies and this can cause reflections and losses.

Without further ado, here are the contestants: 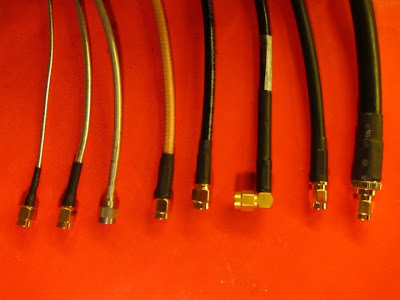 Starting from the left, here are the results.

What’s the result of all this? Well, the differences were smaller than I expected, all cables are probably good up to 10GHz or so and have reasonable losses. This informal testing was probably unfair to the low loss cables, they are meant to be used for long distances where loss is very important, testing on a 75cm piece of cable does not show off what they are good at. I did find a data sheet for LMR400 which says that it is only specified for signals up to 2.4GHz.; according to the rule of thumb above, the 33ps for KSR400 means that for such a short length it had a bandwidth of more than 10GHz. If I really wanted to test this cable properly I ought to buy 100m of cable and see how it performs. It’s probably also kind of dumb to put SMA connectors on such cables since a SMA connector is so small compared to the diameter of the cable, using a N connector would probably work much better.

So, if you need the best performance, buy a good (and probably expensive) and short semi-rigid cable. Or call Huber Suhner and buy their Sucotest cable, I’ve used it before and yes it’s expensive but it’s also flexible and nice to work with; it’s high performance and they will even calibrate it for you so that you know the attenuation for all frequencies up to the specified bandwidth of the cable. I wish I could afford stuff like that nowdays.

Me, I’ll probably buy a couple more cables with RG400, it’s flexible nice to work with on a lab bench and has decent performanc. I must also say that I’m quite happy with rfsupplier, I found them on eBay and they built exactly the cables I asked for at a good price and with fast delivery. I was a bit worried about buying cables from China, but after measuring the cables rfsupplier delivered and comparing them to other variants I have nothing at all to complain about. And I’ll see if they have some cable similar to the last one in the list, since it’s so thin and flexible it’s even nicer to work with and for signals up to 1GHz or so it’s probably quite good enough.